We are always looking for suitable family outings on the weekends. Since we were in the middle of a long holiday one, we were already starting to run out of ideas (at least of ideas I  wanted to participate in, I had reached my limit of arcade games and go-carts). Mad Dog came up with a lovely solution. He suggested we go to the fancy outdoor mall and check out a new eatery for dinner. His thought would be that we could check out the stores for my benefit (if I was really lucky maybe even a purchase for me), have the boys walk as much as possible (to tire them out of course) and eat outdoors (always a good choice when dining with the rambunctious Full Speed and T.Puzzle). 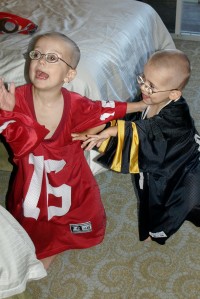 As we pulled into the main complex and drove around a bit to get our bearings, we ended up behind a miniature train. Of course the boys went berserk (especially T.Puzzle who has an undying love of all things train) and I died a little inside. Let me give you some history.

This is the type of train you see at most malls. It’s a new-fangled one that doesn’t run on tiny track. Instead it peruses the ENTIRE mall. I have already ridden the exact same type of train at our nearby indoor mall dozens of times (much to my dismay). The thing I hate (I know it’s a strong word, it’s honestly how I feel) the most about these rides is cramming my adult body into a minuscule train car and then having everyone in the mall stare at me while I pretend to enjoy my discomfort and wave Miss America-style to everyone we pass. I’m a rather self-conscious person and this is utter torture for me.

With a heavy heart, I knew we were going to have to go on the train ride here. I didn’t even know they had one. I may have reconsidered this entire outing if I had full train disclosure (I blame no one but myself).

We made it through dinner and it was mostly enjoyable. There were a few tense moments with T.Puzzle and some asparagus. We got through it. Then it was train time.

Having only been to this outdoor mall once before and never noticing a train, we didn’t know where to get aboard. As we began walking, Mad Dog tried to flag down the conductor to no avail. So we began to high-tail it through the masses of people and car covered side streets. The train seemed to move slowly. It was an illusion.  The boys were frantically trying to keep pace with Mad Dog as the train slips farther and farther from view. We were dodging people left and right and I began sweating profusely. Even an early September evening in Florida can be rockin’ hot. Needless to say, I’m not happy.

We catch the train at a corner only to see it slither away and make a wide u-turn. I’m staring to get angry. The boys are beside themselves fearing all is lost. I turn to Mad Dog and say, “I’m done chasing this stupid (I know, I know, I try so very hard not to use the stupid word in front of the boys) train.”

Mad Dog is single-minded in his quest and does not hear me (he better not have been ignoring me!). He keeps pushing forward. Full Speed is now on Mad Dog’s shoulders and T.Puzzle is weaving back and forth dangerously close to Mad Dog’s legs. In an instant, T.Puzzle gets tangled in the middle of Mad Dog’s stride and falls flat on the paved side-walk with a sickening thud. He lets out a wail and I want to cry right along with him.

After some quick consolation, we are all ready for the train. We pile in the teeny-tiny caboose and I angrily announce to Mad Dog to not make any inappropriate comments about my denim skirt and the awkward angle of my legs. I wasn’t in the mood. He immediately is defensive. “Don’t you start with me,” sort of dealy is what he said. He claims he wasn’t going to say anything, I think his past behavior speaks for itself and I will leave it at that.

So, there we are, Mad Dog and I are fuming at each other and then the boys began to bicker and fight. That’s when I knew this was going to be the best train ride ever.