So far the result of Full Speed’s surgery has been spectacular. It doesn’t seem real. I am having trouble imagining the possibility of much improved vision. 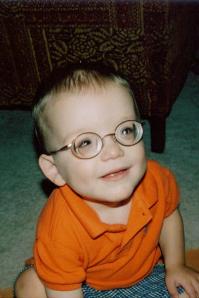 Full Speed was first diagnosed with extreme myopia (which means he was off-the-charts nearsighted) when he was 20 months old. The subsequent journey and various doctor’s appointments from geneticists to surgeons has been a test of courage and faith. I have always held out hope in the back of my mind that his vision would be good (excellent even). I have prayed endlessly that he would have 20/20 vision. I have cried and then I have prayed some more. Eventually, I started to take my cues from Full Speed. He began eye-testing with letters when he was two years old. He handled every appointment (well, there were some deep in the heart of the terrible twos that I think I’ve blocked from memory) the best he could. As he matured, he came to respect doctors and followed their directions with ease. He is so comfortable in hospital/doctor office settings now it’s almost like doing anything else we might do during our day.

I also have learned to evaluate Full Speed’s condition based on his functioning. His functioning is awesome. He has mastered all his physical milestones and then some and is right on track intellectually. I began to realize that extreme myopia later diagnosed as ectopia lentis et pupillae with lens subluxation (dislocated lenses) looks pretty amazing if you ask me.

I had this strange moment when Full Speed was three years old and he was testing for his first Tae Kwon Do belt. As I sat in the testing room with family and friends I had this sort of out of body experience. I saw clearly for the first time that if all Full Speed was ever allowed was minimal vision, he was going to kick life in the ass and be a huge success. I learned a new prayer that day. The prayer was a thank you for the vision provided to my son for it is exactly what he needs to be who he is. That was the day I started to learn acceptance. I accepted his coke-bottle lenses whole heartedly (I mean come on, they are freakin’ adorable!). I accepted that regular eye check-ups (sometimes done under anesthesia) and doctor’s visits were a part of our lives. I accepted that while some of his eye care may be a challenge (patching his left eye on a daily basis), it’s just what we do.

Flash forward and here we are with another major eye surgery under our belts and on the cusp of much improved vision. I know whatever happens Full Speed will have exactly the amount of vision he needs to be whoever he will be (which is incredible in my slightly biased opinion). I will certainly be thankful if that is anywhere near 20/20 vision.

1 thought on “Eye Am Thankful”