I was on the phone with one of my fans yesterday. Well, she’s a good friend and she normally calls me anyway so I’m not sure if that counts. I guess she technically reads my blog with intermittent regularity so that does qualify (slightly) as a phone call from fan. She had called me while I was in the process of preparing a complicated meal (okay, it was chicken nuggets and tater tots) for the boys. She knew it wouldn’t be the most convenient time in my day as we were nearing dinner; she just happened to have a few spare moments and took a shot.

Of course my boys were starving and beating on each other relentlessly. T.Puzzle was melting down and I could barely form a coherent sentence into the phone. After about ten minutes, my friend and I gave up on the phone call and she told me to call her when my life had settled down. I told her I couldn’t do that, I like her too much. If I waited until my life had settled down, T.Puzzle and Full Speed would be college age. She laughed at that. She’s a good friend and she thinks I’m funny (even better).

She also is curious why I don’t have a nickname for myself in my blog. I told her it’s because I am the creator and since it’s from my point of view a nickname is unnecessary. If I did have nickname it might be Double D (not only my initials but extremely ironic if you know what my figure looks like), Sweet Cheeks (catchy isn’t it?) or Hot Mama (no irony intended). Still, I think for now, I will go nickname-less. Of course, if anyone has any suggestions, please let me know. Try to steer away from ‘Double A’ because that would clearly hurt my feelings (I’m very sensitive and the truth hurts).

Nickname or not, I’m still very much Mommy. Full Speed and I have been spending loads of time together on this adventure to excellent vision. Today (since he is still home from school) he requested a date night with his Mom at Applebee’s (which meant lunch without Mad Dog or T.Puzzle). Full Speed thinks it’s the coolest thing in the world to go on a date with his Mom. I think it’s pretty cool, too! I’m hopeful he won’t feel the same when it’s time for his prom. That could be awkward. Especially if he saw my interpretation of the Electric Slide. 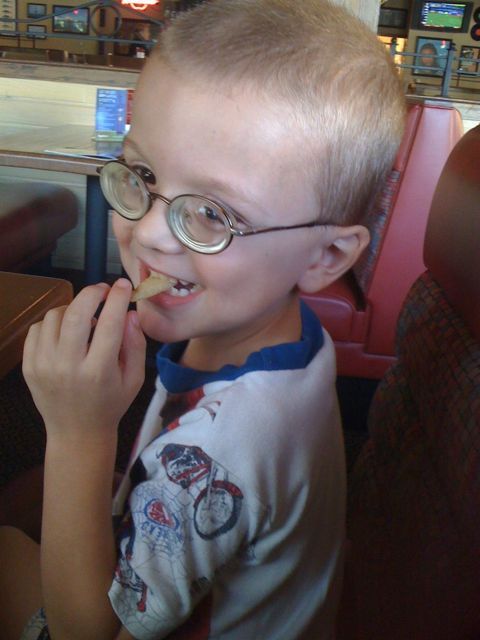