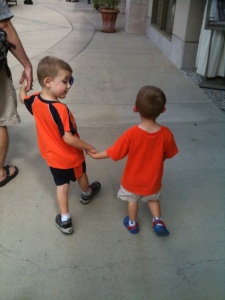 We went back to the outdoor mall to go on the notorious train. It was actually my idea. I know it’s shocking. Since Full Speed’s surgery we are limited to what we can do for outings. We want to avoid communal play areas because they are breeding grounds for bacteria and he isn’t allowed to jump and run as it may jeopardize the stability of his retina. A train ride seemed to be a contained and calm option. Because I was choosing to do it for Full Speed’s sake, I embraced it fully. The strangest thing happened; we ended up having a fantastic time.

We arrived before the train rides began and made our way down to a Mexican restaurant with outdoor seating. The boys were well-behaved and the food was the best Mexican food I have ever ingested (I may have been slightly biased by the additional best margarita I’ve ever ingested but who knows?).

After lunch we make our way to the train (it went so much more smoothly now that we actually know its point of origin). On our way there we randomly run into the boys’ eye doctor. She spots us immediately (we are hard to miss with one kid in a taped on shield and another in glasses) and we chit-chat for a moment or two. She comments on the train (T.Puzzle at this point is jumping all over yelling, “Choo! Choo!”) and that she had never seen it before. The way she references it reminds me of a person who is at a mall to actually shop or meet with other adults for adult conversation. I vaguely remember what that used to be like (again, my memory is a bit fuzzed at the edges as I am still walking off my delicious margarita).

We say our goodbyes and go our separate ways. The boys get along marvelously during the ride and Mad Dog and I are peacefully coexisting. It was virtually pain-free. The boys are doing so well they actually hold each other’s hands for a while without fighting. We reward them by going to the train table at the bookstore. We are having a perfect outing. There are a plethora of engines to choose from, no one else is utilizing the table and T.Puzzle and Full Speed have cooperatively constructed a train made of four cars. They are pushing this train in nonviolent unity. Mad Dog and I sort of forget the time and let them play at length.

We end up pushing T.Puzzle’s naptime. Even though he doesn’t always nap, some days he absolutely needs one. Today was one of those days. He does not handle the news well that it is time to leave the train table. I have to take him outside and place him in time-out. It doesn’t help that he is undeniably cute and that every passer-by stops to say ‘hi’ or comment on how sweet he is. He loves the limelight. He refuses to apologize to me which is standard procedure to get out of jail (you know the Supernanny credo and all). Mad Dog has to manhandle T.Puzzle to get him to comply and he slumps against Mad Dog’s chest in defeat.

He rallies for the ride home but it all hits the fan again when we pull in the drive-way. He refuses to enter the house. Instead, he books it as fast as he can down towards the street. Mad Dog and I collectively had to drop the hammer. Mad Dog brings him in, takes off T.Puzzle’s socks and crocs (he is steadfastly attached to both these entities) and takes away his Lightning McQueen car.

I swoop in and carry his screaming self up to his room. He wails and flails about during his diaper change. I place him in his crib and remove anything else he is attached to. He has no blankets or stuffed animals to speak of. All he has is his pillow and his thoughts as I shut the door behind me.

He tantrums on for about thirty or so minutes and finally gives into the surrender of sleep. We are thankful for the interlude of quiet. It doesn’t last long. Maybe forty or so minutes pass and we can hear him begin to whimper on the monitor. We bring him downstairs and he tries futilely to put his socks and crocs back on. We are allowing him to have them back but we are not helping him put them on. He is feeling wholly misunderstood.

His suitcase is still out by the front door from the night he spent at Grandma’s and Grandpa’s while we were getting Full Speed ready for surgery. He grabs his suitcase, leans against the door and pleads, “I go to Grandpa/Grandpa’s house (he calls Grandma, Grandpa for some reason)!”

If I had my way, he already would have been packed and gone.

I know that seems harsh but believe me, our evening with T.Puzzle did not get any easier. Does it ever get easier? Please, if you are a Mom, don’t tell me your answer. Denial and margaritas are the only things keeping me sane (slightly).