I’m feeling a bit like a blogger who has lost her words (well, only a little, as you’ll see I manage to write on). I’ve been trying to capture what I am feeling and words on a screen cannot do it justice. Full Speed got his new glasses yesterday and they are amazing. What tugged at my heartstrings most was how PROUD he was to wear them. Up until now he has worn his other glasses without complaint. I can’t imagine they were comfortable weighing down his adorable, little face and denting in the sides of his sensitive nose. Even so I was surprised at how excited he was to have his new glasses. I guess the fact that everyone in the optometrist’s office kept commenting on his extreme level of good looks in his new frames probably egged on his sense of pride (and let’s face it, an almost five year old loves to be the center of attention).

Of course during his fitting for his new frames, little brother T.Puzzle escaped from the tiny room with all the children’s frames and was peering at me through a window in the waiting area, standing on a chair of course, and saying “Hi, Mommy!” over and over. It is guaranteed chaos when we trek to the optometrist’s. It’s because it is a place wholly unequipped for the five and under set.

As we exited the office (thankfully with all display cases still intact) and I took pictures of Full Speed’s beaming smile in his new frames, I thought about what it meant. His vision has improved. He can see. My prayer for improved sight from so long ago had finally been answered.

Over the years my prayers have changed. I felt so helpless when Full Speed was initially diagnosed and it made me feel more in control in the sad, dark hours of the night to send a prayer out into the universe. I figured it couldn’t hurt an already challenging situation. Through this process, as you know, I first prayed for the betterment of his vision. Eventually, I let that prayer go (as my acceptance of his condition grew and all that went with it) and I started to pray for different things. I began to pray for strength and courage. One of the most important changes I remember was asking that wherever our journey took us as a family in life, that we would be in a place that offered the best possible eye care for my children. We moved to Florida and the rest is history. Amen. 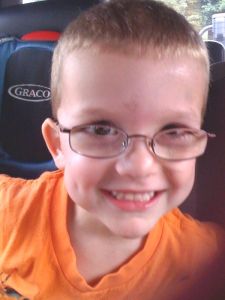