When Mad Dog originally wanted to take our then two and a half year old Full Speed to see the first Transformers movie, I resisted. It seemed too violent and full of innuendo for me to think it was a good fit for Full Speed.  After a lot of persistence on Mad Dog’s part I relented. You know pick your battles and all.

So of course when the second Transformers movie came out you know who and who were first in line. Fine. At least I didn’t have to go.

Now this cinematic wonder is out on DVD. We own it. Of course.

Full Speed has adjusted fairly well to seeing the violent action. He doesn’t have scary nightmares and honestly, he is exactly as hyper as he was before (off the charts).

Well, my opinion of the movie’s effect may have shifted slightly this morning. I was eating breakfast with my adorable boys. We had a lengthy discussion about omnivores vs. herbivores (Full Speed loves dinosaurs).  T.Puzzle sang ‘Hakuna Matata’ and I announced that everyone who was eating at the table were bananavores. They thought that was giggly silly. I even belted out a few bars of ‘Hakuna Matata’ myself.

Full Speed looks at me and says, “You’re hot, but not too bright.” He means it as a way to compliment my singing but I don’t find this very complimentary. I’m speechless in fact. It didn’t feel like a very proud parenting moment either.

In the second Transformers movie there is a point when an evil robot thing refers to Megan Fox’s character in the same way. In that context it seems fitting. At home eating breakfast with my two boys it does not.

I asked Full Speed to not say that again and let it go at that. I didn’t make a big deal about it because I wasn’t sure where to begin. I would have to define ‘hotness’ and wasn’t sure how to make the term relatable to a five year old. Then, I would have to go off into the feminist juncture about never insulting a woman’s intelligence or evaluating her based primarily on her appearance. That seemed like a whole lot of heavy discourse before 8 a.m. We hadn’t even finished our bananas yet. 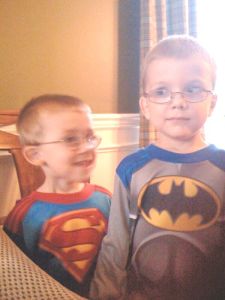