Mad Dog and I had another date night. Our goal is to have a date night once a week. This is an extremely lofty goal but as of late, we’ve been managing it quite well. This time we were off for dinner and a movie. We saw Couples Retreat. It was lighthearted and fun. Not the best I’ve ever seen but it did make us laugh a few times.

When we arrived at the theater we got in line at the recession counter. I was jonesing for something chocolate. Mad Dog and I decided to split a Coke Zero because right now they come in ginormous Twilight collector’s cups. We already have the one with the character Bella (the main female lead) on it and I was hoping we would get one with her vampire boyfriend (Edward) on it. Yes, I’ll admit it. Apparently I am no better than a high school-aged girl when it comes to crushing on a vampire. I was let-down. Our soda came in a Jacob (the werewolf) cup. For those of you out there who have been sucked in (pardon the pun) to the Twilight saga, you can understand how disappointing this can be for someone who is clearly rooting for the vampires.

I pout a little because I don’t know when I’ll be back at the movies and I have a feeling the cups of Edward will run out soon. Mad Dog senses my distress and chivalrously offers me five dollars to go and get another soda and select the cup of my choosing. I knew I married Mad Dog for all the right reasons. He supports my fantastical whims with aplomb. I really love him for that.

I head back to the front and end up engaging in a lengthy conversation with the teenaged boy behind the counter. As soon as I walk up he says, “Let me guess, you want to get another soda. And, let me guess, you want the vampire dude on it.” Am I really that transparent? Which, in case you are curious, is a characteristic of Twilight vampires when they are in direct sunlight.

The boy shakes his head in disbelief. I try to play coy. “Maybe I should pick the one with all three main characters on it. I mean, I am on a date with my husband. Do you think he’d be offended if I picked the one with just Edward on it?” He stares blankly at me and shrugs. Why am I asking relationship advice from someone who’s most likely only learned how to drive last year?

“Well, I need to be true to myself. Edward it is,” I declare proudly for all to hear. The boy smiles a knowing smile and says, “I have to head to the back and get a new sleeve of cups. There was a group of girls in here earlier that wiped out the counter supply of Edwards”. He slips back to the storage area of the theater. He returns and I clasp my hand around the coolness of the cup and I feel victorious. 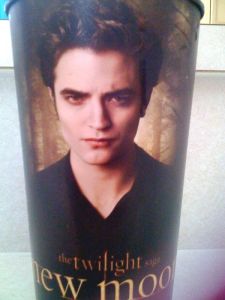 True love can show itself in many forms. For some it could come in the form of a werewolf or vampire. For me, it showed itself tonight as a patient husband that paid for an extra soda that I didn’t really need but most certainly wanted. Thanks, Mad Dog. If there would have been a cup with your picture on it, I would have chosen it hands down.