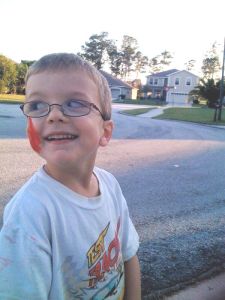 Full Speed is essentially a mini-Mad Dog. For those of my dear readers that know Mad Dog personally, this means I have my work cut out for me. Like his Dad he is incredibly assertive and a no-nonsense negotiator. They also look eerily similar.

Full Speed is five years old going on fifty. He speaks and sometimes acts like a little, old man. Mostly it is sweetly fun. Sometimes, well…, it crosses a line.

Not only is Full Speed an adult trapped in a child’s body, he is slightly OCD (obsessive-compulsive). He likes order in everything. He prefers all drawers and doors shut at all times. He likes everything in its place.

This morning, as the boys had their morning ritual of watching ‘Dinosaur Train’ before school, Full Speed asked to be covered up. T.Puzzle wanted to be included (you know Pete and Re-Pete and all that) so I grab a blanket and threw it over him as well. A pile of mess began to expand from the center of our family room to its outer perimeter. There were pillows, another blanket and an assortment of cars and Transformers strewn about.

Full Speed came over to me and said, “Mom, while I’m at school, you need to clean up this mess before I get home.” Really? You want to go THERE, little man? He said it with complete deadpan as if I’m to jump at the chance to follow his command. I suppose it doesn’t help that when Mad Dog leaves the house he says to Full Speed, “When I’m not here, you’re the boss.” I now know Full Speed believes this. Every Mom in the world, including myself, knows that Moms are the boss no matter who is or isn’t on the premises.

I took a deep breath and sighed (a trait inherited from my Mother). “I appreciate your feedback, sir. However, why don’t YOU clean up the family room before YOU leave for school?” I said this as more of a statement than a question. Actually more like a you-better-do-it-now-or-I’ll-really-show-you-who’s-boss sort of statement.

He got right on board, hopped to it and started in on the mess. Apparently, he’s a little bit scared of me. He really is just like his Dad.