We have been hosting my sister-in-law’s family for the Thanksgiving holiday. She has two boys (B Squared) and they are seven and five. My boys adore them. They wish they could play with them every single day.

Today at Grandma’s we did a gift exchange with all the boy cousins. Even Lil’ Superman was there. We had to do the exchange now because B Squared are from way up north and won’t be here on Christmas. All the boys were in wrapping paper heaven as they clawed their way through gift after gift. It was a heaping mess of joy and a lot of fun to watch.

After the gifts were open I decided I needed to take little T.Puzzle home. He still was emitting large amounts of green snot and coughing up a storm. I knew he needed another good nap at home (me too because I have what he has of course). We took a reluctant Full Speed with us. He protested that he needed to stay with B Squared and Lil’ Superman. We thought he looked awfully tired and could use a break, too.

I had no intention of Full Speed taking a nap. I figured he would rest quietly like always and just have some down time. Lo and behold, he actually fell asleep! That is saying something. The last time Full Speed took a nap was several months ago. He didn’t even nap on his recent post-eye surgery days. That kid was TIRED.

Since more than half of my in-laws had hit the road this morning, my sister-in-law relocated to the now vacant rooms at Grandma’s house. Full Speed did not like this new scenario. 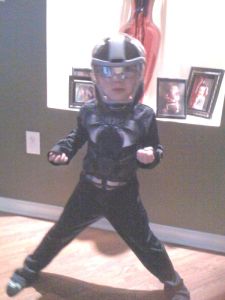 “When am I going to see B Squared again?” he asked with the puppy dog eyes. “The first night B Squared stayed at our house, the second night we all stayed at Grandma’s (except sick little T.Puzzle) and then we came back to stay at our house. I’m supposed to go to Grandma’s tonight or we will break the pattern (which he pronounces pattren).”

“No, Full Speed, not tonight. You need to get some rest, we will see B Squared and Lil’ Superman again tomorrow,” is my firm reply.

“If I go to Grandma’s I PROMISE I will be really good!” he protests. He is mustering every ounce of sincerely sad charm. His eyes are wide and hopeful.

“If I have to stay home I’m going to be really bad then!” he replies.