Since I have been slacking in many areas with the boys because I have been sick; I wanted to get back in the swing of things by preparing an actual meal for the boys. They have had so much processed, fast food lately I’m worried that they may turn into chicken nuggets.

Full Speed determined he ‘didn’t like’ the main course of pasta, peas and turkey sausage and proceeded to fight me tooth and nail about ingesting it. Little T.Puzzle decided he didn’t want raisins (I know you are impressed by this gourmet side dish). Not only was he passionately against eating the raisins, he didn’t even want them touching his plate and screamed and cried because I ignored his tearful requests (trust me, the kid’s had raisins before AND lived). Then he decided he didn’t want the beverage I chose for him. He was in and out of time-out like a revolving office door on a busy day.

After several threats, Full Speed got his act together (a little bit) but T.Puzzle spiraled deeper into his abyss of contempt. He was mad that Grandpa was sitting in ‘his chair’ in the living room. I told him to get over himself. Grandpa offered to move but I drew the line. T.Puzzle was simply not going to get his way. 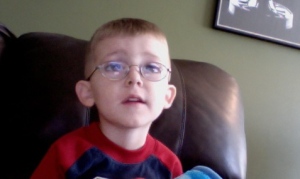 Since time-outs in the dining room corner were not making a dent in his hysteria, I changed tactics and moved him upstairs to his room. He was already at a level 10 and spewing snot like a fountain. I had to sit on the other side of his door to keep it shut. He was beside himself.

After ten very long and tense moments, he calms himself enough that I can engage him in conversation. “If you stop crying and pull it together, you can come downstairs. You need to apologize to Mom first,” I say.

“Sorry! Sorry!” he bleats over and over.

He’s reasonable enough now that I think I can take him downstairs. No sooner than we cross the threshold of the living room than the level 10 tantrum commences. I call ‘uncle.’

It’s 6:00 sharp do you know where your kids are? I know one of mine is smack-dab in the middle of his bed and won’t be seen until morning.