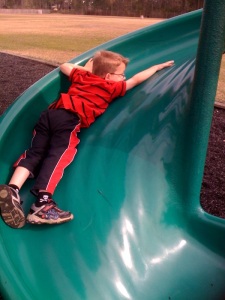 Full Speed has to start patching his right eye again. It’s not that big a deal since we’ve been patching since he was two years old for three hours a day (or so I thought). He has had a good stretch without patching because his vision improved so tremendously since his surgeries. On his last ophthalmology appointment his doctor determined patching five days a week for only an hour would be a good preventative step to keep his vision equal in both eyes. I didn’t think twice about it. I ordered some patches on-line and waited for them to arrive.

The first day of patching, and believe me, I had done a lot of prep-work talking at length with Full Speed about it, I thought it would be a breeze. Full Speed seemed good until… at the first sign of an actual patch, he lost it completely. He started screaming, turned completely red and with a body shaking so much from angry defiance, shouted repeatedly that he would ‘NEVER EVER!!!’ wear a patch.

Yeah, that was a super-fun evening. Luckily, he is older, wiser and ultimately he does what he is told. By the second day he was wearing his patch like an old pro (he thinks it’s pretty cool that he has weekends off) and all is well. However, it gave me pause to know that the out-of-control toddler temperament looms just beneath his surface.

I really should think about hiring a bodyguard.