My sister came across an interesting article in the June/July issue of Disney’s ‘Family Fun’ magazine. It’s about a reward system to motivate your kids to help out around the house. I liked the idea so much I decided to give it a try. I’ve tweaked it considerably so it fits more for a five and three year old. I made our list of rules very broad so it could fit our changing needs of the day. 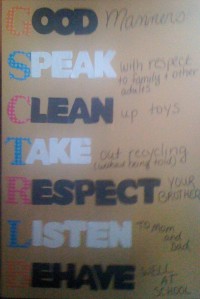 My version is if you follow the listed rules, you earn a pebble that goes in your marked jar. When the jar is filled you can have a reward of your choosing within reason of course.

When I picked up the boys from school I tried to explain the concept and the list of rules. Of course Full Speed had to throw his two cents in.

“So you’re saying that if I follow the rules, I get a pebble?”

“Yes, Full Speed, it’s that simple. What do you think some of the rules should be?” I ask.

Full Speed launches into a rote recitation of our rules of the bathtub: no splashing, no throwing toys, no hitting your brother, etc.

“You sort of have the idea but what are some rules for around the house because bathtub rules won’t really work for that,” I say.

“Oh, well there’s be a good listener, respect Mom and Dad, eat your food and don’t put your brother’s head under the couch.”

1 thought on “The Reward System”