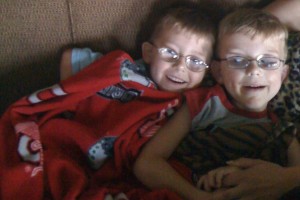 Being stuck at home for 11 straight hours with two active boys is a mother’s form of Chinese water torture. Full Speed has his second day of kindergarten off (very anticlimactic in my opinion) as the remainder of his classmates report for their first day. T.Puzzle has been home since his lense removal surgery well over a week ago. It’s a lot of togetherness when you aren’t able to leave the house as we wait for T.Puzzle’s eye to heal. The kicker is, once that eye is mostly healed, it will be time for surgery on the other one.

Honestly, for the most part, T.Puzzle’s recovery time at home as been kind of special and sweet. He loves being an ‘only child’ if even for only a few hours. It’s just the endless playing of the trains that is starting to wear on me.

Then, to have them both tethered to home on the same day by myself for hours on end, that’s enough to make anyone lose it.

They are good boys. They just reach their threshold of contained inactivity and they have to break through it. We could be sitting watching a movie and before I know it they are both leaping head first off the couch attempting aerial kicks and shouting as loud as they possibly can.

Well, I gotta run, I need to perfect my aerial kick.

1 thought on “Soothing…, Just a Little”