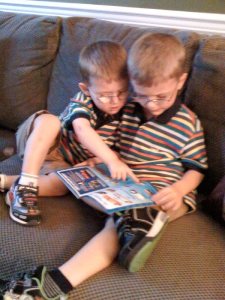 While I was reading a chapter book out loud yesterday, I had both boys planted firmly on either side of me (the separation of brothers is crucial).  T.Puzzle, in an apparent act of affection, draped his arm casually around my neck.  Before I knew what was happening, he began to fiddle with his brother’s face and then it was war.  I stopped mid-sentence and calmly explained that this outburst of violence was unacceptable.  The next person who touched their brother was going to their room.

T.Puzzle seemed resigned to this and kept his arm resting lightly on my neck.  I could feel by the posture of his body, he wasn’t planning on another attack.  As for Full Speed, he dramatically leaned back against the couch and hooked his arms behind his head.  The arm that was closest to T.Puzzle, arched out in a ridiculous angle (he looked like a cross between a monkey and an Olympic gymnast).  He furrowed his brow in concentration and waited for an inevitable flicker of movement from his brother’s hand.  My theory is then he could play victim and cry out indignantly hoping to send T.Puzzle to his room (don’t you just love brotherly love?).

That was it.  I lost it.  Fortunately for everyone involved, I dissolved into a fit of laughter.  If nothing else, Full Speed gets high marks for creativity.

We never did finish the chapter.