I made the mistake of asking Mad Dog to get me a pumpkin for Full Speed’s class project.  Since I would be participating in this day of pumpkins, I was hoping for a delicate, dainty little number that could be sliced and diced in under five minutes.  Instead, he came home with a lovely albeit rather large specimen (he claims the seller insisted it was medium size).  As I carried this behemoth orange mass down the long, school hallways, my back ached and my arms longed for a cart.  Through it all, I kept a surprisingly positive attitude.  With Full Speed in my group, we had fun making all sorts of predictions about the size, weight and number of seeds.  Then, it was time to find out these measurements and compare them to our predictions.  Weighing in at eighteen pounds with a thirty-eight inch circumference, it was one of the biggest pumpkins in all of second grade.

When it came time to cut this beast open, I had a sneaking suspicion that things were about to turn messy.  After cutting a neat circle at its top and gently twisting it off, my heart sank.  Inside the congealed mess of goo there appeared to be hundreds, if not thousands of pumpkin seeds.  Pumpkin insides gross me out in general but this went even beyond that.  I was up to my elbows in slimy, smelly pumpkin guts removing the seeds one by one.  I tried to get the kids and Full Speed to help me, but mostly they looked on in horror as their faces turned ghastly white.  Five hundred and eighty seeds later, give or take a hundred as my counting left much to be desired, we were done.  Full Speed’s prediction for seeds was six.  Almost, Full Speed.  Almost.

The moral of the story is, never ask your husband to buy you stuff for school projects.  What you will end up with will most likely cancel out any of the time-saving and/or stress it may have saved you.  I have 580 pumpkin seeds to prove it. 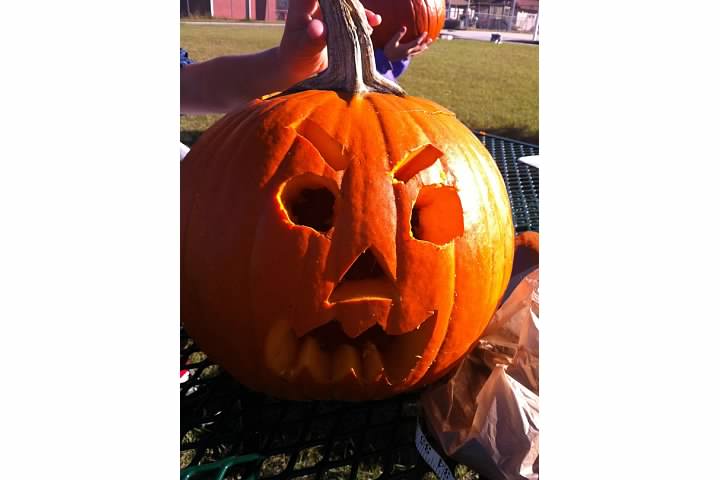