Let’s face it.  Being the lone female in the house no one likes to listen to me.  It seems whenever I give a suggestion, it is automatically denied.  Take bike rides for instance.  I love them.  I could do them for hours and hours.  Suggest a bike ride to my crew and they collectively groan.  Full Speed has been my most resistant rider.  He had been so adamantly against bike riding, he fought tooth and nail when it came time to ride without training wheels.   I didn’t understand it.  I learned when I was five and loved it.  I rode like the wind except being the youngest on my block, it was a very slow, always-came-in-last-place kind of wind.

Over time, I’ve chipped away at this resistance.  Now, dare I say it?  He loves to bike ride, too.  That’s the thing about all my boys, they have taught me to stick to my guns and hang in there with just about anything.  So, if I want something, I declare it and eventually it will be so.  It may not be pretty, it may take six years, but it will be so.  Hey, I got Mad Dog to propose, that alone is worth its weight in gold.

This holiday break I decided to push our family limits.  I was determined we would attend our zoo’s light festival.  I had mentioned it early and often each time coming up against the usual resistance.  When we finally squeezed it in to our schedule, it was if doom was upon us.  There were long faces, questions as to how long we would be there and a general sense of ‘this ain’t gonna be fun’.

Before we exited the car I made each of my guys (Mad Dog included)  promise to only speak positively of what was to happen.  If they couldn’t think of something nice, they would have to keep their thoughts to themselves.

As soon as we entered the gates the newness, the bright lights and the excitement overtook the boys.  Full Speed declared, keeping it positive naturally, “I’ve never done this and I can already say I’m having the best time ever!”

Of course the lit up dinosaurs didn’t hurt… 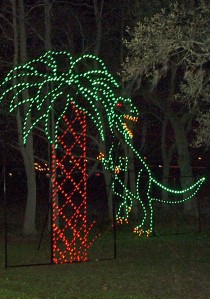 Maybe Mom knows what she’s talking about after all.