I want to give you fair warning.  This post is going to be pretty emotional.  You are going to get a sense of how deeply connected T.Puzzle is to me, his overarching love of school and lastly, Full Speed’s brotherly commitment to look out for T.Puzzle.  It’s all there…enjoy.

In recent months we have been noticing a theme in T.Puzzle’s life.  And that theme is…video games.  He is rather obsessed and talks about gaming constantly.  Even when we have a round of ‘family questions’ at the dinner table, rather miraculously he can loop it back to video games.

Here are some examples:

If you could be anyone in the world for a day, who would you be?

“Someone allowed to play video games all day and night long.”

If you saw your friend steal something, would you turn them in?

“That depends on what it is.  If it’s a cool video game, probably not.  I’d want to play it with him.”

You get the idea.

A couple years back, T.Puzzle was given the task at school to make me a Mother’s Day card.  Here’s the final result, and get those tissues ready… the tears are going to fall… 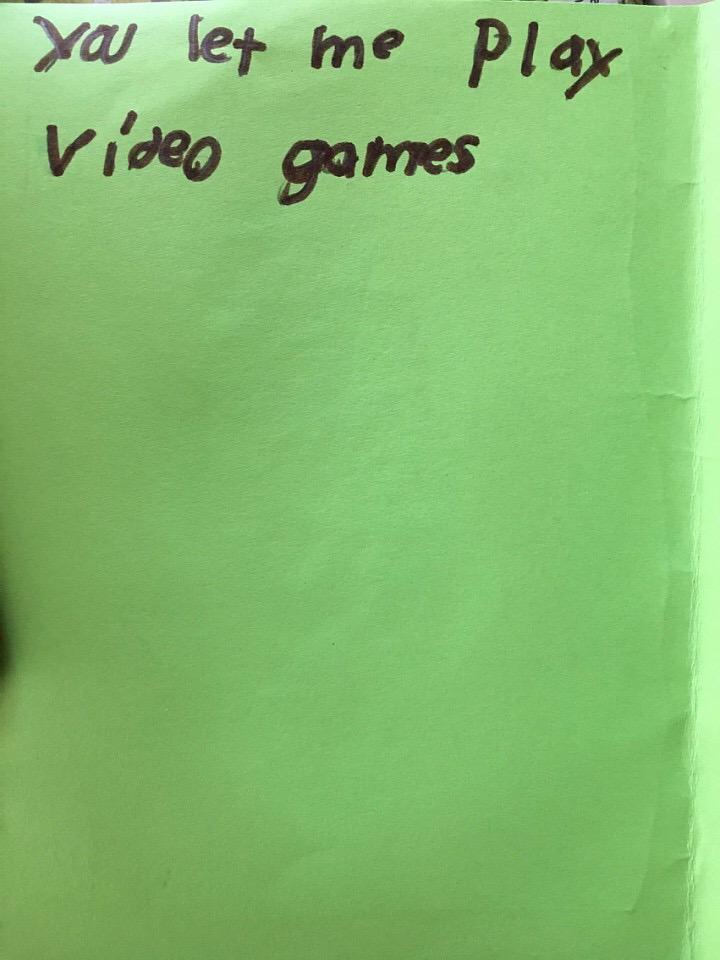 I told you it was emotional.  I’ll give you a minute while you collect yourself.

Since it’s clear that T.Puzzle loves video games above all else, what’s a mom to do with this sort of intel?  About two weeks ago I put T.Puzzle on an incentive program.  His manners and attitude still often leave much to be desired.  If he happens to forget his manners, roll his eyes at me or give me lip when asked to do a chore, he gets a strike.  If he gets three strikes in a seven day period, he loses gaming privileges for the weekend (the only time he is allowed to play them during the school year).  Naturally, it’s working pretty well.  Except for this past week, he was feeling particularly ornery with his brother and had already used two strikes.  We were on the edge of our seats…would he make it the final stretch without a strike?  He did ok on the last night, but he still had to make it through the morning (the seven day strike period runs Friday after school through Friday morning the following week).   As he trounced into the kitchen this morning I asked, “Do you think you can make it until you go to school without getting another strike?”

“Sure!  But I better leave now!  Gotta go.  Can’t wait to get there!”  This all coming from a kid who is currently appalled that he has perfect attendance.

Of course, this made me laugh.  He is self-aware enough to know that his inabilty to control impulses could land him in third strike territory.

We managed to get through breakfast and the rest of our morning without incident.

T.Puzzle was first out of the garage with his bike as usual.  I turned to Full Speed and said, “Can you believe he actually made it without a third strike?”

“Mom!  He didn’t say goodbye to you!  That’s an automatic strike!”

“I’m serious, Mom!  He rode his bike DANGEROUSLY FAST down the driveway.  He’s gotta get a strike for that.”

“Full Speed, it just warms my heart how much you look out for your brother.”

Wonder if he loves him as much as video games?