In every woman’s life there are defining moments.  There are milestones such as college graduation, falling in love, having children, etc.  Once children are a part of the picture, suddenly their milestones become our treasured markers of the passage of time.  For instance, the first time Full Speed reached earnestly to play with a toy hung from the arm of his baby carrier, I was overjoyed.  I was convinced by this simple act that I had given birth to a certified genius.  We were at the mall and the air was heavy with the scent of salty pretzels and my overblown perceptions of my ‘super baby’.  Still, it was an awesome moment and to this day whenever something great befalls my kiddos, it’s like it is happening to me as well.

That’s why when my boys lined up against the backstop at Wrigley Field before the start of the game, I was giddy with anticipation.  Mad Dog had arranged for them to be part of the nine lucky kids that got to run on the field and meet a player.  We had no idea which player it would be.  We hoped for the best and made peace with the worst (you know who you are).  I was seated alone and peered anxiously at them to see where they would run.  Once given the signal, they were to sprint to the position that would coincide with the player they would meet.

Finally, they were off and running.  It seemed obvious Full Speed was headed towards the outfield.  But then, oh my god, T.Puzzle ran to FIRST BASE!  He was going to meet ANTHONY RIZZO!  I repeat….ANTHONY RIZZO! 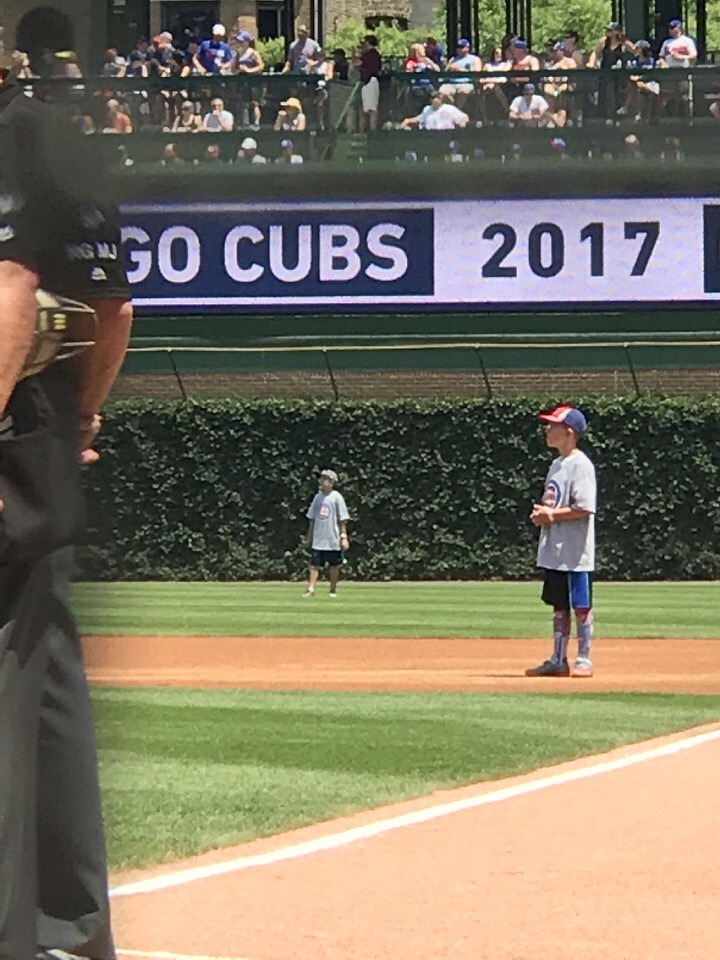 Is it obvious he’s my favorite player?  Hmmm, what gave it away?

I jumped for joy and screamed so loud the fans in my section thought I had lost my mind.  I was able to compose myself enough to articulate that both my kids were out on the field and one was meeting ANTHONY RIZZO.  This made sense to them, but I could tell they still thought I was mildly insane. 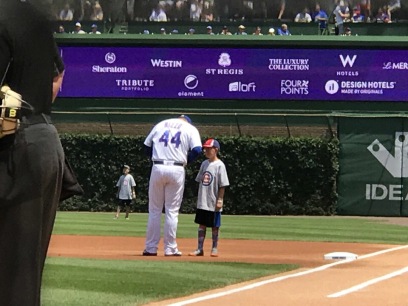 T.Puzzle had a brief exchange with Anthony (yeah, I’m now on a first name basis with him), and got him to autograph a baseball (proudly on display in our front room).  It  took all of two minutes but for me, it is a defining moment that still brings me great joy.

Full Speed was sent to right field and had a lengthier exchange with near-giant Jason Heyward (well, giant compared to Full Speed and most of America). J-Hey was so genuine in what he said to Full Speed, he is now Full Speed’s favorite Cubs player. I love that, clearly he is a player that is gracious and I’m so glad he had such a positive impact on Full Speed.