I’m actually kind of speechless. Since I am a writer what does that make me? Wordless?

I cannot wrap my brain around the fact that we were given the greenlight to have my dog come home. About two years before I started this blog, we had to relocate her because T.Puzzle wa allergic to her. It was heartbreaking to lose her but it was the right thing to do. He basically had a runny nose for the entire first year and half of his life. I knew as soon as the words ‘dog allergy’ left the doctor’s mouth, my dog had to go.

As the years have gone by, T.Puzzle’s health began to improve. His eczema vanished, he outgrew his egg allergy and he had less and less sick days at school. Recently, I had started to suspect that his dog allergy had diminished as well. For my own peace of mind I scheduled an allergy test. It showed a vast improvement in his dog allergy which means my little, white fluffy ball of love can come home!

She is not a perfect dog and certainly no longer a puppy. She is sometimes a dog only a ‘mother’ could love. It is also very possible T.Puzzle may not respond well to having her around. There are a lot of variables I have no control over.

What I can control is how much I love her. I plan to care for her for as long as I have her. I want to give back to her at least some of the unconditional love that she has given me. She sat with me every day while I had the worst morning sickness of my life during my pregnancy with Full Speed. She would snuggle up for the long haul when I had yet another pregnancy related migraine or vein infection in my legs (yes, it is miraculous I endeavored pregnancy twice). It was during that time that she taught me about loyalty, patience and love.

Her official return date is early next week. I still can’t believe she is coming home. The good news is, she never once has left my heart.

It’s not easy to ask for help, is it?

I’m trying to let go of control a little more and give my babysitter more responsibility.  I know this will get easier with time and my life might even feel more manageable.  Imagine that!

First up, I gave her a litany of instructions and let her pick up Full Speed from school.  This way I could go get my monthly allergy shots which are available at the most inconvenient times.

She picked him up without a hitch and I survived my three shots of lord knows what and all was good.

Once I returned home, I picked her and Full Speed up and we headed to T.Puzzle’s school.  I added her to my child pick-up list and showed her the ropes.

Again, smooth sailing.  I was so proud of myself.  Look at me, everyone!  I’m letting someone help me.

We get in the car and my boys were being, well…., boys.

The babysitter looks at me.

“Well, now I know why you stopped at two,” she joked. 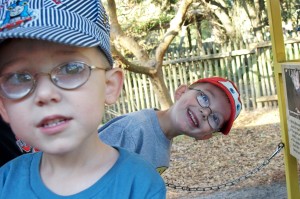 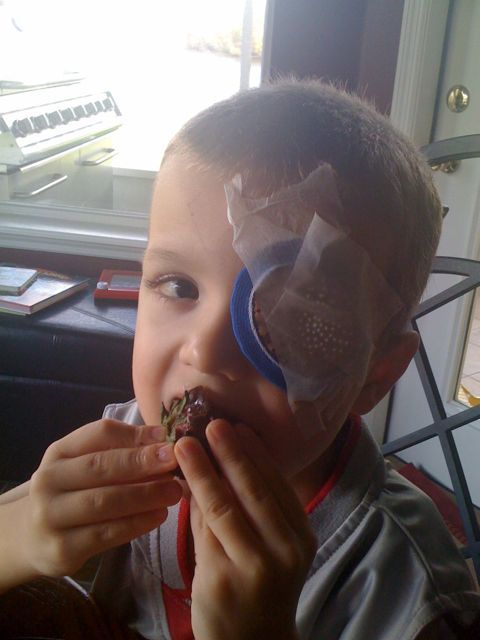 Patient Full Speed is home for the week. It’s not as an intimidating prospect as it used to be because he is much easier to manage. When I was pregnant with him years ago, I had these deluded fantasies that he would accompany me on all my errands throughout the week and we would laugh and giggle and have a grand ol’ time. That was before I understood the subtleties of childhood temperament and the level of movement needed to maintain an active baby’s contentment. In other words, I didn’t know a darn thing about raising a stubborn, hyperactive boy who was constantly in motion.

Almost from the moment I brought him home it was like an assault of shock and awe. He wasn’t fond of sleep, needed constant stimulation and he was a non-believer in staying in one place. My dreams of having pleasant company as I made my way through the mundane tasks of existence quickly evaporated in a hyperactive cloud of smoke. I soon learned to do more in less time and to always be moving when doing so. For example, I could make it through a run for groceries if I did just that. Run. I would literally have to move through the store at a slow and steady jog. If I paused for a moment, Full Speed would freak. Constant movement was the key to keeping him seated and quiet. I would get to the check-out and all hell would break loose because we would be at a standstill. Oh, the fond, fond memories.

Since his little brother has taken over the reigning crown of difficult small person in our home, I am now often surprised to find how much I enjoy my time with Full Speed these days. We have very similar senses of humor and can crack each other up just by a look or a word. He’s comical. He must have gotten the funny gene from my Mom. She was hilarious.

He has been accompanying me to my allergy shots and he loves it. Surprisingly, so do I (the company, not the shots). He is calm (mostly) and respectful (mostly). He can actually entertain himself so even if it takes a long time, there is not a meltdown in sight.

We did run in to a small catch today. An elderly woman came through the door of the allergy office with a walker and Full Speed loudly says, “What in the world is that thing?” He said it rather rudely, too.

Oh, you Moms out there know the feeling of awkward embarrassment a child’s curiosity and their inability to filter their thoughts can cause. Every Mom has a similar story (that is if your child can speak). The kind of story where your child states the obvious and the recipient of this obvious observation is less than pleased.

How did I handle it? I faced it head on. “Full Speed, it is called a walker that helps her to keep steady. It isn’t rude to wonder what it is, but the way you asked about it was disrespectful. I would like you to say, ‘sorry ma’am’.” He did and I’m not sure he totally understood what he was apologizing for but it seemed like the right thing. The woman seemed grateful that I openly acknowledged his comment and let it go after that. A situation concerning a walker or the like (glasses, a cane, etc.) is a little easier to handle than if your child comments on an actual physical, unchangeable characteristic of someone else. I am hoping I don’t have to blog about that anytime soon (fingers crossed!). Other than that (and it was relatively minor in the grand scheme), we had a fine time.

It took five, long years to get to the point with Full Speed that more often than not he is well-behaved and even pleasant on outings. If I do the math, and believe me math is not my strong suit, I have two years and some change for Frick to reach this behavioral/emotional milestone. I don’t know if I have what it takes to wait it out. I guess I have to. My only other alternative is to wait for my meds to kick in. 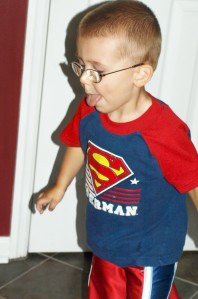 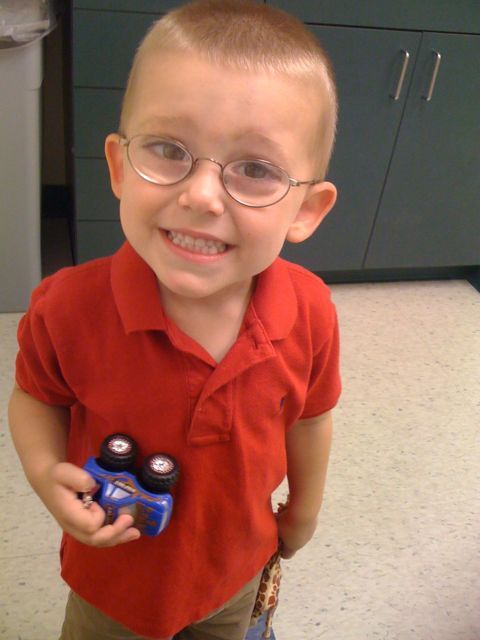 Today is all about T.Puzzle. It’s his turn for some serious one-on-one time with Mommy. This special treatment is because he has been quite allergy-prone in the past. When he was eighteen months old we found out he was allergic to eggs and a couple months later learned of his severe, dog allergy (we had to remove our beloved dog, White Fluffy Dog  from our house it was so bad).

The time had come for his periodic allergy check-in at the Children’s Clinic. We arrive and Madagascar (the animated kids’ flick) is playing in the waiting room. He looks at it a nanosecond and promptly starts to sing ‘move it, move it” and shake his booty from side to side. It’s his favorite song in the whole movie. Maybe his favorite song in the whole universe the way he has committed so passionately to singing it. He also says it in two-year-old speak so it sounds more like ‘mow it, mow it’. Any way you slice it, it’s freakin’ adorable.

The nurse calls us back after a few moments and asks that T.Puzzle remove his shoes. The happy part is that Mommy had actually found his missing spidey croc so his shoes matched today. The unhappy part was that T.Puzzle was less than pleased to part with them. He was pretty miffed at the nurse for requesting such an unreasonable thing of him.

She then asks him to step up onto the scale. It’s only an inch off the floor. You would think the way T.Puzzle is teetering on it back-and-forth in fear that it was hundreds of feet from the floor. Yeah, I get that he has some depth perception issues but an inch? Really?

I can’t get him to stand still and he is fast approaching a level 7 meltdown. The nurse is not offering anything except judgment and we are getting nowhere. Eventually, there is a loud, curious noise that escapes from one of the other exam rooms. I have no idea what it was, but its sudden strangeness was enough to make T.Puzzle freeze. We were able to get his weight and cut our losses at that. The nurse didn’t feel like attempting to get his height. Five minutes with T.Puzzle in all his glory and I could tell that was more than enough for her.

We are shown to the exam room and the nurse quickly exits as if there is a fire never to return. When the doctor, who is kind and caring, arrives I warn him that T.Puzzle is two and that ‘defiance’ is his middle name. I told him that T.Puzzle’s ever changing mood might make him difficult to examine. The doctor said he could handle it (he has a three year old son who apparently puts him through the wringer, too).

I place T.Puzzle on my lap and proceed to hold my breath. I hope that whatever level tantrum he reaches at least it stays under a five.

The doctor moves in with his stethoscope and…..,

I had a realization. Not only does T.Puzzle like to play with the truth as it pertains to the details of his life, he likes to manipulate his behavior so that I am forced to do the same. He behaved like an angel because I said he was going to act like a devil. Now Mommy is the liar.