Here’s a few things you should know about Mad Dog.  He’s handsome, incredibly smart, generous and he works a lot of hours.  For him long work days are like that he has brown eyes.  They are simply a part of who he is.

As I mentioned earlier, he is also an incredibly smart man.  He knows that raising two boys, especially the two that I have, is quite a challenge.  Since he isn’t available to help out more, he has always encouraged me to enlist the help of babysitters.

I hit the jackpot last year when my hair stylist offered up to help me with the boys on her free days.  I was surprised because I had shared honestly about my boys and she volunteered to help me anyway.  She finds their extreme energy and strong personalities adorable.  She joined in the routine quickly and has been a tremendous help with the boys and especially  karate.  If you’ve noticed, there have been much less posts about traumatic incidents at karate since she’s joined the ranks about a year ago.

Quite frankly, I owe it all to this sitter.  She is a lifesaver.

Now, her lifesaving efforts will soon be over.  She starts a new job, will have less free days and won’t be able to lend a hand during the week.

Unless they award black belts to stressed out Moms for their wine consumption, I don’t see how this will end anything but badly…! 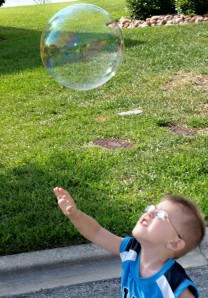 My boys love to play attack bubble. Up to this point I have been designated the official bubble maker and distributor of the family. These roles were demanding and draining. I received lots of ‘coaching’ from the boys on how I could increase my bubble production rate and my bubble creativity. I have to say, all the critiques were beginning to burst my bubble.

Then Mad Dog suggested I get an automatic bubble machine.

Let me know what invention or coping mechanism has been a life-saving tool for you. I would like to add fast-food drive thrus, portable DVD players, babysitters and my personal favorite, mango mojitos to my own list.

As you all know, yesterday at Target was a complete disaster (see Duck and Cover). I called in reinforcements for the afternoon because little T.Puzzle’s behavior remained naughty throughout the whole day. Our babysitter came in the afternoon so I could pick up Full Speed from school without having to take little T.Puzzle. Then, Mad Dog and I would go on to have a lovely date night in which we saw the movie ‘Date Night’. In my opinion ladies, Mark Wahlberg steals the show. Check it out.

So, as I make my way to pick up Full Speed, I feel a few minutes of freedom from my  T.Puzzle-related anxiety disorder and savor my five minute solitary car ride. When I reach Full Speed’s classroom he is out on the playground. His teacher always chats with me about his day and upcoming classroom events. As she approaches she says, “Oh man, I almost cried today.”

My heart drops. Oh no. Don’t tell me Full Speed had a bad day, too.

“What happened?” I anxiously venture.

“He just looked so grown-up in his cap and gown for graduation pictures I couldn’t take it. He is such a little man.” (Yes, there is a graduation for voluntary pre-kindergarten. I know, it’s a bit much.)

I let out a long breath that I hadn’t realized I had been holding. “Oh, thank God he had a good day,” I say.

If he hadn’t, she wouldn’t have been the only one holding back the tears.

Mad Dog could tell I was about to lose it. I was unsuccessfully trying to get little T.Puzzle to poop on the potty, which let’s be real, may not happen until he reaches puberty, and Full Speed was not helping the situation. Both boys were fighting and misbehaving and I couldn’t take it anymore.

That’s when Mad Dog took over. He told me he would watch the boys for the afternoon and made me some appointments at the spa. Then, when I returned, he hired a babysitter and took me to a lovely dinner.

Before he took over, Mad Dog announced, “Boys, you will be spending the afternoon with your father. It will be just the guys.”

Little T.Puzzle looked befuddled. “You’re not my father,” he said. We all stopped and looked at him trying to figure out what he was getting at. “You are my DADDY!” Oh, well that makes sense I guess.

I had a wonderful time at the spa. I even went to the shops they had nearby. It is an amazing feeling to walk into a store and not have to worry about spontaneous wrestling or the possible breakage of merchandise. I’m telling you it’s the little things like this that bring out the most joy in life.

When it was time to hand over the little men to the care of the babysitter, I was filled with apprehension. Not because of her, she was perfectly kind. It was BECAUSE she was perfectly kind. I worried the boys would be so out of control she would be tempted to toss them over the balcony. They really hadn’t behaved very well for the past several days. I could also tell by Mad Dog’s wearied expression and the shortness of his fuse that the boys had been in their full glory for their afternoon of ‘just the guys’.

While Mad Dog and I dined, I expressed my frustration with little T.Puzzle’s terrible threeness and Full Speed’s naughtiness. I was feeling like quite a failure in the motherhood department and was just about ready to quit my ‘job’ and outsource it to a nanny, neighbor or relative. I let it go after a bit. I think the two glasses of wine with dinner helped me to do so.

When we returned to our room, I cautiously crossed the threshold and waited to hear the horrible tales of what had transpired in our absence. And you know what? The babysitter had nothing but positive things to say. In fact what she said was glowing. My boys were ‘incredibly sweet’, ‘got along and played together great’, ‘were courteous’ and she even went so far as to say I was doing a good job as a Mom. I bit my tongue because my sarcasm was screaming for me to ask her if she had tripped at some point and had hit her head. I couldn’t fathom that the two boys I left behind were so amazingly well-behaved. It felt really good to have an outsider approve of the job I’m doing after a rough couple of days.

So, now we are wrapping up our family vacation adventure. We started our day off with a room-service breakfast which the boys ate out on the balcony. Yum! 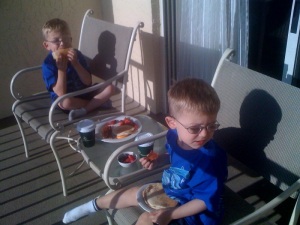 Then, it was time to take my two over-the-top and thankfully, very cute and lovable boys, pack them up and hit the road for home. And, I know the adventure doesn’t end even though our vacation did.