Over the past few days T.Puzzle and Full Speed have not been on their best behavior.  In fact, whatever you use to describe the opposite of good behavior; that’s what they are doing.

The weekend was rough.

Then, while I was at T.Puzzle’s karate practice (hooray that Mad Dog had a chance to join us!), Full Speed decided to be a sore loser for the babysitter.  He thought crying, tantruming and hitting her were acceptable ways to deal with the fact she beat him at a game.

When she walked in the door with Full Speed behind her, she described to me these unfortunate events.  I felt the color creep up my neck and my face burned bright with frustration, anger and whatever else a Mom feels when her child’s behavior mortifies her.

She packed up T.Puzzle to head home so Mad Dog and I could remain for Full Speed’s practice.  Upon

leaving, T.Puzzle melted down for me and I almost snapped.  The babysitter gracefully swooped in and escorted him to safety.

As Full Speed practiced his kicks and punches, I stewed in my thoughts.  I was disappointed that my boys were being so poorly behaved.  I know that kids aren’t going to be perfect and will have a bad day or two, but this seems to be spiraling and it isn’t fun.

I’m not sure what to do.

They have lost several privileges already.

Why, even after all these years, do I think I can take both boys on a simple errand and actually think it could be simple?

I had already had a successful Walmart run with little T.Puzzle in the a.m. (this in itself is nearing miraculous) but in my haste had forgotten a couple items. I figured I’d scoop Full Speed up from camp and head with both boys to the grocery to get the remainder of my list.

When all was said and done they were banished to their rooms and lost pebbles out of their reward jars for their embarrassing display of awful behavior.

Well, I just lost my marbles… 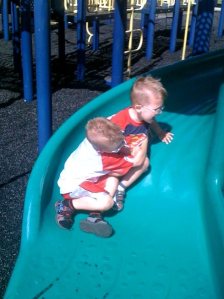 We were at brunch and as awful as this sounds, I was happy that little T.Puzzle was annoying the heck out of Mad Dog. Not because Mad Dog was annoyed but it validated the short fuse I’ve had with T.Puzzle for the past several days. Lately I’ve been feeling ready to lose it over any minor infraction of his. So maybe it isn’t all me. Maybe lots of it has to do with him and his recent behavior set.

Mad Dog’s patience was clearly being tested. It started with little T.Puzzle launching a purposeful flick of white milk across our table. Then he deliberately thumbed a hole in the side of his cup. This allowed a pool of milk to collect in the center of our table. To top off this double display of insolence, as Mad Dog was trying to discipline him, little T.Puzzle  kicked him. Mad Dog kept his cool and threatened consequences in hushed tones just as the waitress came to check in on our table. She notes the damaged cup and says she will replace it. Mad Dog says that yes it was broken and a replacement would be great.

This is the moment that little T.Puzzle decides to repent. “I’m sorry, Daddy! I’m sorry!” He says it in such a pitiful way that in the eyes of the waitress he is a sweet, gentle soul asking for forgiveness over his ‘accidental’ broken cup. It also appears that we are mad at him for ‘accidentally’ breaking his cup and that is why Mad Dog is talking to him so harshly. The waitress and her sympathy are almost palpable.

Mad Dog and I both roll our eyes.

I say, “Trust us, he’s all game. You didn’t see the five minutes (or the attempted kick) leading up to this moment. He appears a lot more sweet than he actually is.”

Believe me, the truth hurts.

We were at the barber shop over the weekend waiting for Mad Dog’s turn in the chair. The boys were being good but eventually, little T.Puzzle decides that he needs to test every, single behavioral boundary. Soon, Mad Dog resorts to taking away his beloved Lightning McQueen crocs as punishment for not listening. Little T.Puzzle starts to lose it and dance around in anguish.

Well, Full Speed is not going to let this display go by unnoticed. I’m sure you are familiar with the sibling phenomenon of “My Sibling is Bad, therefore I’m Super-Good”. Full Speed wanted the world to know that little T.Puzzle was being out of line.  Full Speed has access to a cell-phone that can take videos. It is an old phone of Mad Dog’s that can’t make calls, texts or emails. We use it to keep Full Speed entertained with the games, camera, and video options on it.

So, he dramatically pulls out his phone and says, “I want to take a video of little T.Puzzle being bad.”

He holds the phone up, points it at a distraught T.Puzzle  and shouts, “Action!”

Of course T.Puzzle didn’t disappoint and Mad Dog and I found ourselves highly amused by Full Speed’s budding directorial inclinations.

The adventure continues… we were at the park and things were going well if you can believe it. All of a sudden Full Speed looks completely panicked. He has to ‘POOP!’

I call to T.Puzzle who completely ignores my command to hurry to the bathroom with us. He climbs higher and higher out of my grasp and smiles sweetly. He knows I can’t do a darn thing about it.

Full Speed’s panic is increasing with each passing second. His eyes are growing wider and he looks at me with pitiful eyes. “I have to poop NOW!” he insists.

and leaves prey temporarily immobile, unharmed and completely compliant. Alas, no laser-stun gun is available to me so I do the only thing I can. I leave little T.Puzzle unattended and Full Speed to the restrooms (which fortunately are right next to the playground). I tell Full Speed  he’s going to have to ‘man-up’ and poop without me in there because I have to stand outside to keep an eye on T.Puzzle. This makes Full Speed crazy with fear. He doesn’t want to be left alone in the creepy, playground bathroom and he starts to cry. “Man-up!” is all I can say to him as I run back outside.

At this point, little T.Puzzle has positioned himself so that he is completely unreachable and he looks like the cat that swallowed the canary. I. AM. LIVID.

Then, I hear Full Speed wailing and look up to find him outside the bathroom crying with his pants around his ankles. “Go back inside, I’ll be there in a minute!” I yell. I’m so frustrated that he couldn’t have just stayed put but really he is the least of my worries. T.Puzzle has yet to move to lower ground.

I run back to the bathroom, clean up Full Speed and my hands as quickly as possible and order him to wash his own hands before he returns outside. I hightail it back out to little T.Puzzle who by this time has lost his focus and has starting chasing some older kids around. He doesn’t realize I am watching him and as he descends to a spot I can actually reach, I make my move. I run at full tilt and grab him. I tuck him under my arm and use the force of my anger to help keep him locked down. I jog the best I can back to the car and Full Speed eventually follows.

The only way I may ever go back to the park or back in public with little T.Puzzle is if someone invents that stun gun I described. Help a Momma out, people.