Imagine long ago the intensity of competition in a gladiator arena. As these men battled for their lives, one could understand that emotions would be volatile. When playing a sport on the beach or in the backyard, I’m not quite understanding a need for such emotional volatility.

My sister and her extremely awesome family came for a visit. While we were staying at the beach, it was only natural that this time would evolve into a sporting event of some sort on the sand. The first game we played was touch football. It was my two nieces and Full Speed vs. myself, T.Puzzle and Mad Dog. 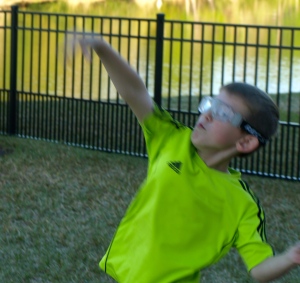 This may shock you, but I am not very gifted as a football player. I don’t let this stop me because if everyone doesn’t take it too seriously, my lack of skill and poor understanding of what I am supposed to be doing, is actually quite entertaining. Like I said, if you don’t take it SERIOUSLY.

Unfortunately, both my boys take it hard-core seriously. It’s like we are all back in that gladiator arena and if we lose, we DIE.

Thankfully, Mad Dog thinks I’m adorable so when I stink up the field, he happily lets it go. I find wearing short-shorts or extra tight pants helps my cause with him, too.

However, with my boys, you know, the ones I carried in my body for NINE months and gave LIFE to, they have no mercy for their dear, old Mom.

T.Puzzle yelled at me when I dropped a passed. Then, he yelled at Mad Dog for not passing to him and making the awful decision to throw it to me. When Mad Dog did pass it to him and he dropped it, he yet again yelled at Mad Dog for his ‘terrible throw!’. When my super awesome niece, made a super awesome catch that she marched into the end zone, I hugged and congratulated her.  T.Puzzle was appalled. “Mom, how could you cheer for the other team!?!” He was so mad he could barely look at me.

On the other side of the field, Full Speed was completely frustrated by his inexperienced teammates. Sometimes, as QB, he would throw it in the sand on purpose instead of risking a throw to one of his unqualified (in his mind) receivers.  Then, on the rare occasion my team would score, he would take his anger at this out on T.Puzzle. This could be a late hit, an early hit or any rough hit in between which all are completely illegal in a game of TOUCH football.  When one such hit reached an extreme level, I intervened and called a do-over for that down for my team. If looks could kill, Full Speed would have murdered me on the spot.

Mercifully, the game ended and T.Puzzle handled the loss graciously of course. He stalked off the field and refused to play anymore for the rest of our time at the beach.  Super fun.

I was so glad that it was over and I said to my sister who had witnessed the game in its entirety, “Wow, my boys and their level of competitiveness is pretty brutal.”

She kindly said, “They are both very passionate and hate to lose. It’s a good thing.”

“Really?” I replied. “Because I just find it annoying!”

If I hadn’t been on the field, I may have found it more amusing than anything else (or if I wasn’t genetically responsible for them). I’m guessing by the time they learn to manage their competitiveness a little better (as Mad Dog has to some degree), I will be too old to play anymore.

Either I need to grow some thicker skin to keep playing now, or wait it out and purchase a beach-compatible motorized wheelchair so I can rain down the thunder thirty years from now.