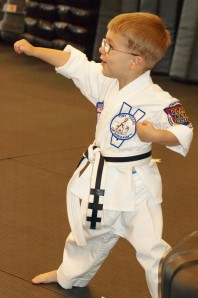 The boys had their Tae Kwon Do testing last night. They did spectacular. Full Speed’s focus was laser sharp and he was very loud (this is thought to be good in the land of Tae Kwon Do). Even T.Puzzle impressed the audience with how far he has come in six months (i.e.- he no longer screams and cries for twenty minutes at the beginning of every class). He executed punches and kicks well and even semi-shouted ‘yes, sir’. Usually you can barely here his tiny voice among his classmates. Full Speed legitimately broke his board and little T.Puzzle broke his too (with a smidge help from the instructor). Overall, I was pleased as punch with their remarkable display of self-control, discipline and mastery of the Tae Kwon Do curriculum.

I’m just thankful I’m not on a reality show followed by cameras 24/7. Not fifteen minutes before their great performance was set to start, Full Speed was sassing me because I had picked him up ‘too early’ from school. Huh? I guess he was angry that he didn’t have time to play with his friends outside. He then turned this anger on his little brother and began to alternately kick and hit him. Once I had the two now very unhappy boys strapped in the truck they begin to verbally fight over what rank they are. T.Puzzle kept taunting his older brother by insisting that Full Speed was only going to test for a white belt. This upset an already angry Full Speed who melted down in tears. I had to give one of my big ‘Mommy is Disappointed in your Attitude’ speeches that went on and on and looped this way and that eventually losing any trace of logic. It worked though, at least for Full Speed. He said he wanted a hug before we went inside. Once inside in the tiny torture chamber, oops, I mean tiny changing room, T.Puzzle decides this is the perfect time to tackle his Mommy over and over. He keeps coming at me from the left and then the right. He is relentless.

At this point I say a Hail Mary and do my best to refrain from saying what I really want to (yeah, I’ll admit, some of my thinking was angrily profane) and do my best to regain control of the situation. My hair is a tousled (not in a sexy way) mess, I’m sweating profusely and I’m squeezing my eyes shut so frustrated tears cannot escape.

How is it then, that behind closed doors me and my children are falling apart at the seams but to the world we can present a unified and even dignified front? ‘Why, why?’ asks the woman with the obvious split personality.