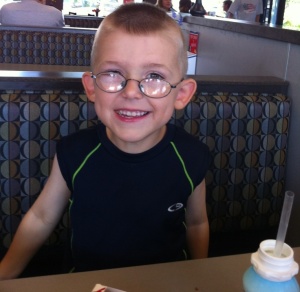 A neighbor and I were recently chatting about raising our boys.  Hers are grown, as you all know, mine are not.  We both said that in our experience motherhood gets better with each passing year.  It’s a combination of learning to accept things exactly as they are and the natural maturation of children.  Basically it’s easier to let things slide if your kids are more self sufficient, follow directions better and have more fully developed personalities to entertain you.

I was keenly aware of this conversation as I took T.Puzzle to lunch at Chik-fil-a.  It was a breeze.  He sat quietly and promptly ate his food.  He went and played independently.  Instead of endangering other kids with aggressive behavior, he actually helped a little girl who was stuck halfway between platforms.  Yes, that’s right, he HELPED her.  He didn’t bite her, kick her or punch her.  He was so proud of himself he ran out to tell me all about it.  He also lobbied that this may be a great item to include in his behavior report for tae kwon do this evening.

Naturally, there will be times today when he tests my patience.  The nice thing is that now there is more balance.  He gives a little and therefore so do I.

And for the record as I sat alone drinking my soda and watching him play, it may have been the best Diet Coke I ever tasted.

I had this crazy idea that I would take the boys for haircuts. They have been rocking the mohawk look and it’s amazing how quickly it grew out. My plan was to pick Full Speed up from school and take both boys directly to the children’s salon. It is a pretty fantastic set-up. There’s a foosball table, an indoor climbing structure with a slide and an endless array of cool vehicles to sit in and watch Nickelodeon while getting your hair trimmed. They had a splendid time. I played foosball with Full Speed who insisted he was winning no matter how many times I scored. “That one didn’t count, Mom, only mine did,” (of course). Little T.Puzzle took to the slide like a fish to water (more fish similies later; I know you can’t wait but don’t get your gills in a tangle). They both did great for their trim and I was feeling really glad to have it done. Haircuts usually eat into our precious, weekend family time and I had just saved us the hassle. Win, win for sure.

Until,… it was time to leave. Little T.Puzzle absolutely refuses to leave and makes a scramble for the back of the slide

structure. He is just about out of reach when I manage to grab his leg. He immediately starts screaming. Full Speed tries to help and yanks on the other leg. Full Speed accidentally tugs off little T.Puzzle’s croc in this muddled process. I see that this is a hot-button for T.Puzzle because he is really starting to lose it. As I manage to wrestle him into my arms (and by now, a crowd of sorts has gathered to watch the show), little T.Puzzle throws his arm back and smacks me squarely on the face.

I take him outside and all hell breaks loose. He’s screaming so loud I can’t think straight. I try to maneuver him to a time-out spot and quickly realize that he is violently flopping about like a dying fish so I can’t. I scoop him up and head to the truck. I grab his other croc from his foot and say he can’t have them back because he slapped me.

He is inconsolable. He cries and yells the whole way home. He is so upset he almost makes himself vomit. I get him home, send him to his room and try to regroup.

But seriously, isn’t it enough already?