T.Puzzle brought home an assignment.  He needed to read an article, write three facts he learned and give his opinion about the content.  I thought it was an ambitious task and asked him how he felt about it.

“I think it will be easy except I don’t really remember what an opinion is,” he replied.

“That’s ironic since you are full of them,” I said as I went on to describe what it means.

That’s T.Puzzle for you.  Full of honest feedback all of the time, whether you want to hear it or not. Most of the time not, but even in the moments when he is shockingly honest, I admire his ability to speak his mind.

For example, in our house, if a parent asks you to do something, you are expected to do it the first time.  T.Puzzle has yet to master this.

“I thought the dogs were YOUR dogs,” is his reply.

He says stuff like this all the time.  The words roll right out of him with no thought of impact or consequence.

He is a wonder to me.  When it comes to sports, he is such a passionate competitor, that he is often yelling at his teammates (he even gave his coach a talking to after letting the opposition score in a practice scrimmage!) or stomping out of the backyard as not enough plays fall his way playing football with his brother.

On the flip-side of this often impertinent, highly competitive young man, lies this ginormous well of empathy.  You have to watch him closely and for days at time to catch glimpses of it, but when you find it, it’s spectacular.  While he likes to see others fail at something finding it hilarious, if he thinks someone is being hurt, it deeply touches him.  Whenever we watch a movie where it seems as if someone is being injured, he needs to sit by me and we have to talk through in detail how it is all make-believe.  Recently, on a trip home with Mad Dog and Full Speed, there was a very bad traffic accident.  Having seen the smashed up cars knowing people had been in them made T.Puzzle quiet for a long time after.

In the mornings, on the days Full Speed works out with Mad Dog, T.Puzzle and I sit in silence.  We seem to be on the same wavelength.  In this perfect silence I sense the totality of him.  He is one-third Mad Dog, one-third me and one-third of something else entirely.

How will this wonderful mash-up of a personality unfold?

I have no earthly idea, but am so grateful to be a part of it however it turns out.

One minute frustrated over losing a game…

Snuggling with our dog in the next…

My gut reaction is always ‘no’.  I do not like to be spontaneous.  I like plans and think that sticking to them prevents meltdowns and unnecessary drama.  This is my weak attempt at controlling life.  Do routines and plans give me comfort?  Yes.  Do these routines and plans always work out how I want them to? No.

Part of evolving as a woman and a parent you have to look at yourself and try to make some changes.  You have to look at all parts of the whole.  Some of these parts are not so great.  How do you know when you’ve found a not so great part?  When you examine it you feel uncomfortable in the pit of your stomach.  That uneasy feeling is your signal you’ve hit pay dirt.

My hidden issue is control.  Growing up I learned to endure an often challenging environment by becoming an impossible perfectionist.  Spontaneity doesn’t really jive with this.

So, why did I marry someone like Mad Dog?  He is at heart a spur-of-the-moment kind of guy.

I married him because somewhere deep down I knew my cookie-cutter ways needed to be challenged.

Yesterday when we were on our way to the outlet mall to buy Full Speed some long pants Mad Dog said, “Let’s see if we can find you a dress and take the boys to a nice dinner.”

Oh, well let me tell you every part of my being screamed ‘no!’.  I was in exercise gear, no make-up and hair disastrously unwashed (I was wearing a baseball cap no less!).  I tried to imagine finding a flattering dress, trying it on, having it actually fit all the while keeping my boys from wreaking insane havoc on the store and its patrons.  I started to sweat, my heart rate increased and my anxiety shot through the roof.

I made the conscious effort to know this is my first instinct, and while it has been my coping mechanism in the past, my life is such that I don’t need ‘no’ as a crutch in the same way.

Okay, there was one point when I was agonizing over the size and color of the dress and T.Puzzle and Full Speed were running boisterous laps that I was about ready to throw my hands up in defeat.  Instead I pushed through.  I found a dress, we grabbed some nice shirts for Mad Dog and the boys and went and had a fancy ocean side dinner. 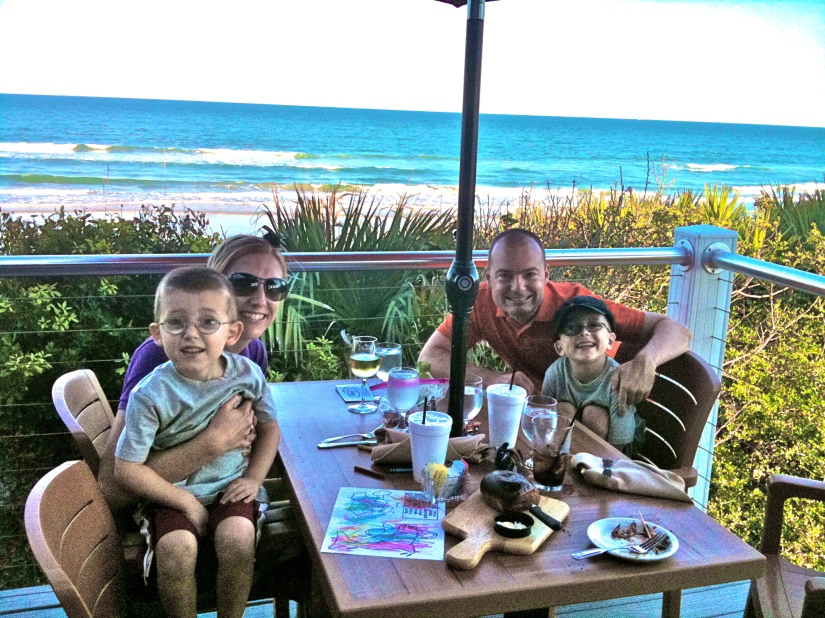