After little T.Puzzle’s weekend meltdown (and mine, too), he woke up from his nap absolutely miserable. Mad Dog and I braced ourselves for a bumpy evening. All you had to do was look at little T.Puzzle and he would burst into tears.

After dinner to get us through until bedtime, we decided to watch Karate Kid 3 as a family. Then the craziest thing happened, little T.Puzzle was completely rejuvenated. In a matter of about 2 minutes he went from sitting quietly on a chair to full-blown mayhem. It was bizarre. It’s not like Mad Dog and I haven’t seen outrageous behavior before, it’s the extreme turnaround that was mystifying.

He was jumping on the couch, dancing around and singing at the top of his lungs. We would try to redirect him but then he would bust into spontaneous jumping jacks. 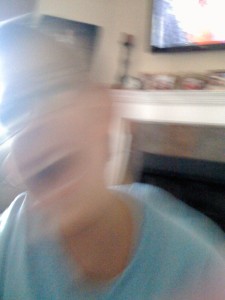 It was too much.

All I wanted was to sit and snuggle with my boys at the end of the day.

Little T.Puzzle’s outrageousness made me sigh.