Mad Dog and I had a date night planned so we could Christmas shop for the boys.  While at Super Target, Mad Dog lobbied for a miniature version of our Christmas tree for the boys’ room.

Full Speed and T.Puzzle were fast asleep when we returned home.  Mad Dog silently placed the small tree in their room. We tiptoed out and anxiously anticipated a big reaction once the tree was discovered in the morning.

They boys were dazzled.

There was much animated discussion on how the tree came to be in their room.  The idea that made the most sense were elves of course.

Later that morning T.Puzzle tried to explain to his teacher about the mysterious tree. 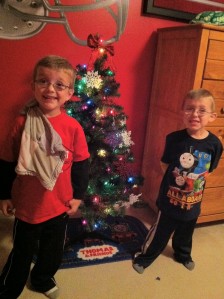 “Who do you think put it there?” she asked.

“I think it was robbers,” he suggested his eyes wide with certainty.

I love a good thief.  Not only did this ‘thief’ not steal a single item from our home, he or she left it beautifully decorated.

I guess crime does pay.

I have a sure-fire way to get a compliment. When dropping your child at school/camp, consistently wear old t-shirts and scruffy looking shorts. Oh, and hardly ever comb/wash your hair, too. That way when you make a tiny effort of simply putting a comb to your hair and throwing on a cute necklace, it sends shockwaves through the school/camp’s staff. They can’t help but comment on your appearance in a complimentary way.

The reason I say this is that I actually put some effort into myself before leaving the house today. I was more embarrassed than flattered at how many compliments I received at Full Speed’s camp. Makes me wonder how bedraggled I have looked up until this point.

Today is a big day. Full Speed has his orientation for kindergarten so I am attempting to look pulled together even if I don’t feel it (you know, first impression and all). We will see his classroom and meet his teacher. All I hope is that his teacher is a person who can appreciate high energy.

And, thank you to Mad Dog for my surprise blog-a-versary flowers yesterday. They are beautiful and I am thankful you remain my number one fan (regardless of how I look).

It’s nearly impossible to surprise your significant other. That’s because your lives are so deeply entwined any time you veer off course their suspicions are raised. It took some planning and discretion but I think I managed to surprise Mad Dog with a cake for his birthday at his family’s Thanksgiving feast. I also made sure that his parents’ house was sufficiently supplied with Ben and Jerry’s ice cream (cookie dough is Mad Dog’s absolute addiction).

The end result was awesome (it even had a picture of the boys on it riding a motorcycle taken at our recent portrait sitting). The cake turned out better than I hoped and was quite tasty. It was red cake with cream cheese frosting which is also a Mad Dog fave. My end goal wasn’t necessarily a delicious treat; it was to demonstrate how much I love Mad Dog. He does so much to care for our little family; I wanted to do something special for him. 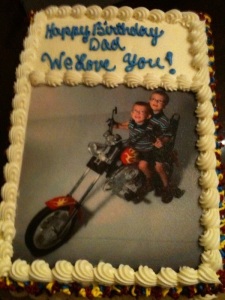 After the cake, and let me tell you, it was weird slicing through the picture of my boys’ faces, all the boy cousins set forth in wild play. However, it was obvious little T.Puzzle was not feeling great. The sniffle and sneeze he’s been fighting developed into a full-blown fever topped off with green snot. Additionally, as the evening was winding down, he had an explosive poop which required a shower and a changing of the clothes for him (he was NOT happy).

Well, you know how the saying goes; it’s not really a party until someone has a messy, explosive poop, right?