In a world where children are becoming more sophisticated earlier and earlier, I have been keenly aware of the changes in my boys, namely Full Speed.  Yes, his body may not be totally ready to burst into manhood, but I’ve had a feeling for a while now, that complicated questions have been churning in his mind.  I’ve always had a healthy sense of denial about the actual ‘birds and bees’ discussion because frankly, I thought I could pawn it off on Mad Dog.  Oh, how I loved living on this little island of glorious, ignorant bliss where all I would ever talk to my boys about were sports and movies about sports.

Both Mad Dog and I felt like the time for the serious conversation had arrived.  Mad Dog had the brilliant idea of finding some books about the changes boys face (see? I don’t even want to type the word puberty) and giving them to Full Speed since he is an avid reader.  This way, he would get all the information he needed and would be a good basis for Mad Dog to have the necessary discussions with him.

Life was so much more simple when books about Elmo ruled 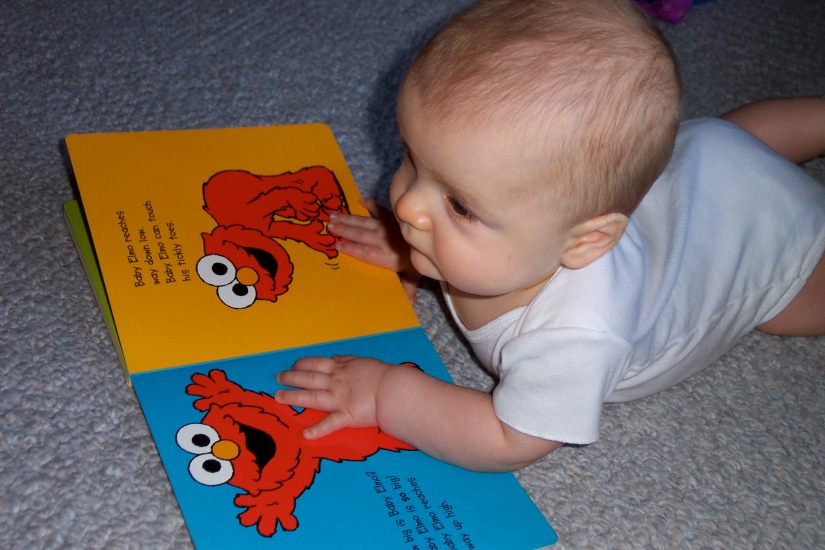 Well, this didn’t go exactly as planned.  Full Speed, like his nickname implies, read the books speedily in one sitting.  Then, he proceeded to get a stomach bug that night and I was left home alone with him, for an entire day with all these questions swirling about.  I did what I had to do.  I talked to him about things in such detail it would have made a sailor blush.  While I was talking, I sort of had an out-of-body moment as I observed myself saying these almost unspeakable things out loud to my BABY.  I was woozy and light-headed.  Even though my insides cringed, I kept a calm exterior going.  I didn’t need to add to Full Speed’s confused wonderment by being flighty.  I had to sit there and I had to say it and I had to act like it was no big deal.

I think we both grew up a lot during this conversation.  At times, I felt like I was speaking to the adult version of my son, at other times, I could see the shocked little boy within him.  Either way, the timing and the conversation felt right.  I left the room knowing that he is armed with the correct information, he knows that his parents are there for his questions no matter how embarrassing and that some of the details of growing up are just plain gross.

All I can say is when it’s T.Puzzle’s turn, Mad Dog…. I happily pass the torch to you.

4 thoughts on “The Birds and the Bees”